What makes Isosaari one of the most beautiful and interesting places in the Finnish archipelago?
The answer is breathtakingly beautiful scenery, rich cultural history, versatile and untouched nature, interesting architechture and the island’s peacefulness, of course. Isosaari truly is the pearl of the sea! 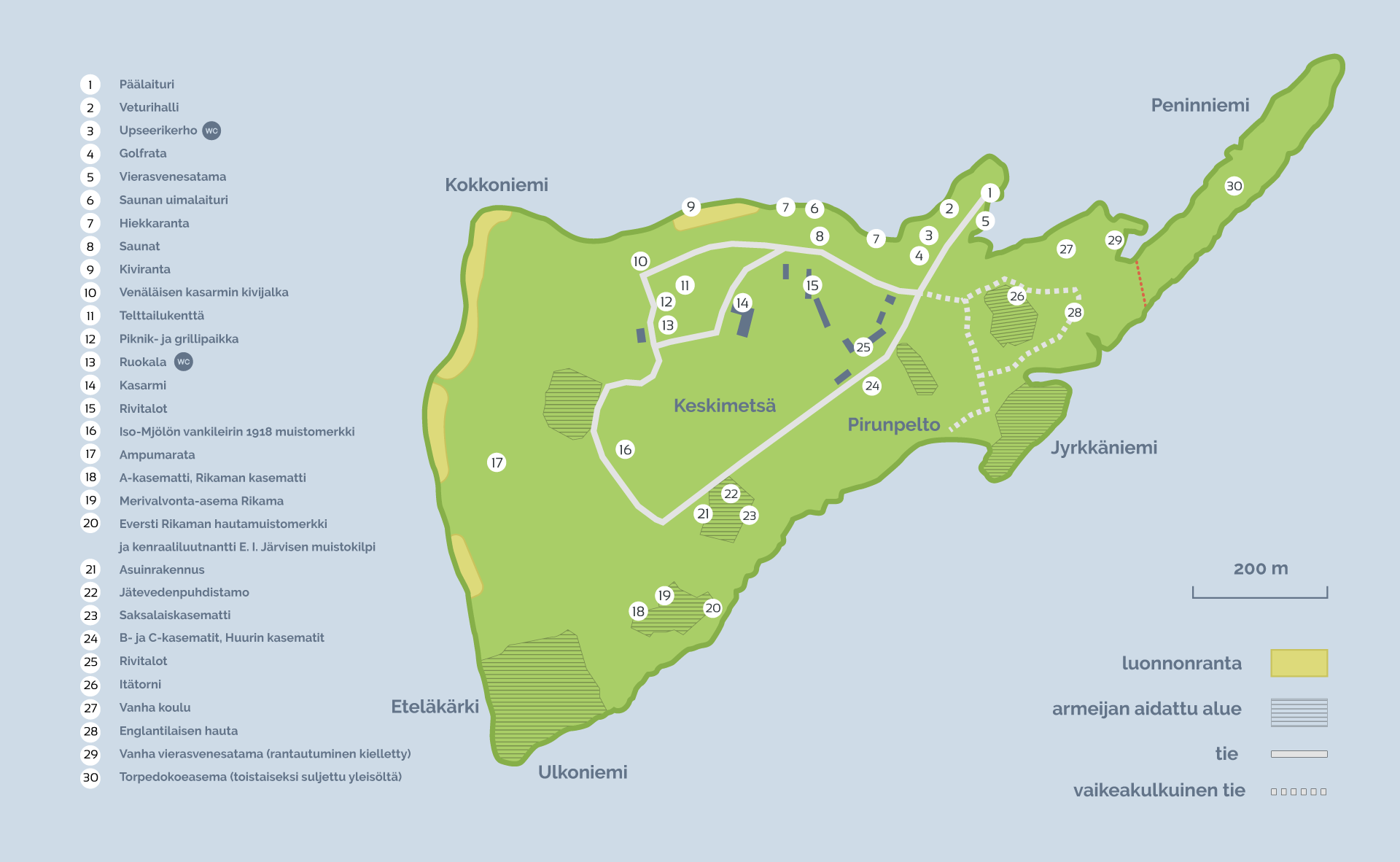 Isosaari, a pearl of Helsinki’s outer archipelago, is located close to the beginning of the main sea lane to Helsinki. Since the mid-17th century the island has served as a landmark for sailors, a base for fishing, a military island and a research centre. The island is covered by forest for the most part and the nature there is diverse. The island features various sandy and rocky beaches, and has good roads. The surrounding fishing grounds are plentiful, seals thrive nearby and some rare bird species, like the white-tailed sea eagle, nest there. Far from the city, the only sounds on the island are the whispering of the wind and the lapping of the waves.

Isosaari gained its first inhabitants in the 19th century when Finland was still under Russian rule. The island was fortified as part of the expansion of Viapori (Suomenlinna) and it has served as a military island. As such access was restricted, but in 2017 the island was opened to the general public and Suomen Saaristokuljetus Ltd has opened a sea crossing from the Kauppatori marketplace to the island.

Since the mid-17th century the island has served as a landmark for sailors, a base for fishing, a military island and a research centre.

A joint assault by the French and British naval force on Viapori in August 1855 during the Crimean War was a turning point in the history of both Isosaari and all the islands off the coast of Helsinki. The battle in question was a source of shame for the Russians and the Finns because the range of the enemy navy’s cannons was so great that they were effectively incapable of countering the firing. The 70 enemy ships anchored off Isosaari bombarded Viapori incessantly for 40 hours, causing enormous damage. At least one Englishman, George Quinnell, is known to have died during the battle. Quinnell’s grave can still be found on the island. After the so-called Russian War, the process of Isosaari’s fortification began in earnest but the project was prolonged until the late-19th century owing to financial difficulties and the rapid pace of technological developments.

In the 1904-5 Russo-Japanese war, the Russian navy was almost entirely wiped out, which only served to underline the importance of the Baltic maritime fortresses, with the defensive fortress of Viapori (Suomenlinna) and the defensive structures in the Helsinki archipelago assuming particular strategic importance. The ultimate purpose of the fortifications was to protect St. Petersburg, and Isosaari was an essential part of the outer ring of fortifications.

After the Finnish Civil War, a prison camp for Reds is built on the island.

In the beginning of the 20th century, Isosaari was kitted out militarily: heavy gun emplacements, concrete casemates, rangefinder pavilions, searchlight stations with electrical substations, electrical underwater minefields with push-button switches, electric communicative cables to the neighbouring military island of Santahamina and the other artillery islands, and more modern fortress technology were all built on the island. Meanwhile, some of the island’s existing structures were expanded and some new facilities were built, such as maintenance buildings, an engine shed for a railway (nowadays it houses equipment for deployment in the event of an oil spill), and more premises for the rank and file, like a recreational officers’ mess.

After the Finnish Civil War, a prison camp for Reds was built on the island. There were up to 1,500 prisoners and 30 guards. The camp conditions were extremely poor and the guards were often brutal and inhuman in their treatment of prisoners. Many died there and were then buried in mass graves located in the centre of the island. A memorial to the Red prisoners was erected in 1955.

The island was home not only to new recruits, but also service personnel and their families. Its remote location meant that weather conditions often prevented access to the mainland, especially in the winter. This led Isosaari to become self-sufficient in various ways. It also affected the cultural and recreational life. The soldiers inhabiting the outer archipelago were granted more funds for provisioning and recreational activities, because the living conditions were considered more challenging. For example, at an early stage of the canteen’s construction in 1933, a projector room for watching films was incorporated. There are also a number of saunas on the island. The largest of them, the so-called ‘Million Sauna’, was built around 1942. A lot of effort was put into the building of the island’s saunas, so they are not only spacious and comfortable, but also appealing to the eye. The beautiful sandy beaches were, and still are, excellent for swimming.

The officers´ mess, on the other hand, was more than just a restaurant: dances, billiard evenings, shooting competitions, darts contests and many other events were held there. Currently the old mess building houses a restaurant and has retained the atmosphere of its rich history. And sporting activities were also supported. The island used to have a mini-golf course, sadly fallen into disrepair. The tennis court and a sports hall, on the other hand, have been preserved. The island’s crowning glory is its nine-hole golf course.

There was also a school on the island. The old building was relocated from Lauttasaari, west of Helsinki, to Isosaari in 1987, but is now faced with demolition, even though it is in good shape; there are still children’s drawings hanging on the walls. The boats, used for fishing, for example, were moored in a separate harbour.

Throughout the island’s history, the living conditions have been challenging. In the 1960s, a pleasant, modern apartment complex consisting of six terraced houses was built for the staff and their families. Behind this lay the Finnish defence force’s wish to keep the staff on the island since the older buildings were not able to compete with the mainland in terms of amenities. Great effort was put into the settings of the new houses and the area was made into a parklike village community. The lush, leafy scenery is as beautiful as ever. In fact, compared to many other military islands, Isosaari is breathtakingly beautiful, well taken care of and maintained with copious amounts of love and money. It is both an enjoyable and relaxing place to be.

Compared to many other military islands, Isosaari is breathtakingly beautiful, well taken care of and maintained with lots of love and money. It is an enjoyable and relaxing place.

Isosaari has been important for Finland, most notably in the development of the country’s artillery. The island has been central to the renewal of the artillery ever since the 1920s as well as serving as an important training base throughout the 20th century. Under the command of colonel J.L. Rikama, Isosaari gained prominence as a pioneer of modern Finnish artillery. Rikama has his own memorial plaque on the island, and one of the island’s artillery batteries is named in his honour. During the years 1933-36 Finland’s first torpedo testing station was also built on the cape known as Peninniemi. At the turn of the 20th century torpedoes were cutting edge technology, technology that Finland had developed during the period under Russian rule. Following Finnish autonomy, development work had to be continued independently. The tests carried out on the island moved the development of the weapon forward significantly. More recently the station has been used as a research station examining corrosion. In the postwar period, Isosaari was still being actively developed. The importance of the island increased further with the development of heavy artillery, marine and radar surveillance. The development work and renewal of the coastal artillery continued up until the 1990s when a decisive shift was made towards a mobile, mainly missile-based coastal defence system. Basic training on the island was discontinued in the beginning of the 21st century and the state decided to lease out the island in 2017 to Suomen Saaristokuljetus Ltd for recreation and tourism.